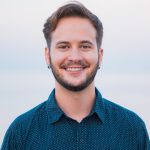 Zach is a second-year graduate student with interests in moral psychology, metaethics, and political philosophy. He also likes reading history of philosophy. Before coming to UNC, he earned his B.A. in Philosophy and Spanish & Portuguese from Vanderbilt University and his M.A. in philosophy from the University of Wisconsin – Milwaukee. Zach has far too many hobbies for his own good, including but not limited to: singing in choir, learning languages (German right now), Latin American literature, guitar, being outside, coffee.