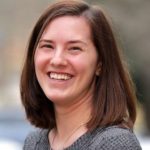 Sally received a B.A. in Philosophy with a minor in Cognitive Science from the University of North Carolina at Chapel Hill in 2017. Shortly after, she joined the department as the Parr Center’s Administrator. Sally transformed the Parr Center Undergraduate Fellowship and then transitioned into her current role as Director of Undergraduate Programming in 2019. When not in the Parr Center, Sally can be found in the UNC School of Government, completing coursework for the Master in Public Administration program. She will graduate with an MPA and a Graduate Certificate in Innovation for the Public Good in 2023.