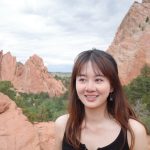 Outside of philosophy, she loves music and is expanding her musical repertoire to include the harp. Being a musician at heart, she agrees with Socrates that philosophy is the greatest kind of music.